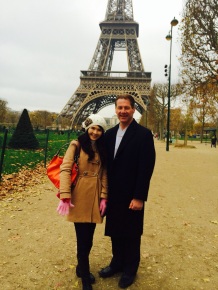 After completing his first impromptu job interview with a world rights organization, Leon met with another French tabloid to share his mandamus petition and personal ordeal caused by state retributions for his long overdue reform efforts. He was even able to spend time with a fellow tourist he met during his office visits. The weather has turned cold and drizzly but it hasn’t dampened his spirits with all the colorful holiday lights and music along the shopping avenues and world class sites.

As fate would have it , Divorce Corp producer Dr. Joseph Sorge was also in Europe doing interviews with fathers rights groups in Denmark. He is working on a second movie documentary and will try to do a piece on Leon’s efforts in Paris if an opportunity arises. This is part two in our Paris series, and we need your financial support. Please assist our common cause by making a donation, purchasing a court program or sharing our reports with social and mainstream media. The mandamus petition is a must- read especially if you like John Grisham novels. United we stand!

One thought on “An American in Paris: Parental Advocate Leon Koziol Takes Stand for Human Rights in Family Court”