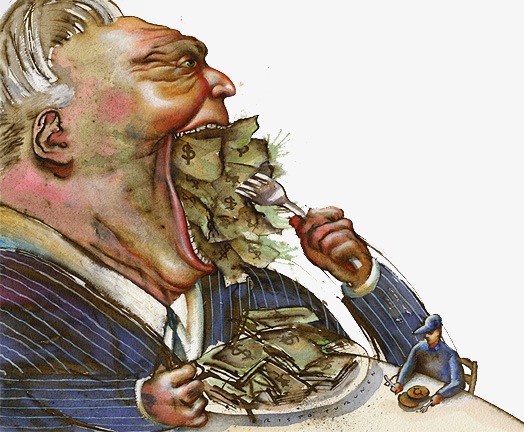 Most people view judges as honorable office holders committed to justice, equality and all that other good stuff we read about in civics class, as it should be. But behind the robes, in the recesses of chambers and among discreet exchanges in restaurants, bars and golf courses across America, there is often quite another set of characteristics at play.

Bias, coercion, deal-making and outright crimes are taking place which violate all manner of ethics. And in our nation’s domestic relations courts, such corruption is taken to the next level under a pretext of family confidentiality, thereby concealing the misconduct and protecting a trillion dollar industry built on needless conflict.

A chaotic process has resulted, one that a Supreme Court Justice once described as a “Kangaroo” operation, In re Gault, 387 US 1, 28. The victims are left with no real remedy because judges have legislated for themselves a rule of absolute immunity unlike the rest of us when we violate the law or public trust. The people have never consented to this rule.

Accountability is thereby undermined. Judicial commissions remain political or overwhelmed so that vast numbers of legitimate complaints are simply tossed to the curb. This is the way a self-regulated branch of government retains false esteem. If a judge renders an edict, it is considered sacrosanct. The loser must have done something wrong.

But think again. New York’s ex-Chief Justice Sol Wachtler was imprisoned for federal crimes during the nineties. He was charged with stalking, extortion and other sick conduct involving the child of his mistress. He even directed court staff to harm the license of the lawyer assisting her in tracking down the perpetrator, Wachtler himself.

In his book, After the Madness, Sol Wachtler explains that judges are made to believe that they are gods. Such deep rooted convictions do not disappear. Judges have been impeached by Congress for lesser things such as an abuse of contempt powers and non-criminal behavior. But that is a rare and sometimes politically motivated event. (See Video – New York Honors High Court Criminal)

The problem becomes epidemic when such corruption finds its way into divorce and family courts. In the infamous “kids for cash” scandal, two Pennsylvania judges were convicted of bribery charges after committing minors to detention centers built by contractors for kickbacks. It resulted in 4,000 reversed convictions and wrongful incarceration of American youth.

Other examples include New York Supreme Court Judge Gerald Garson, convicted of bribery and corruption of judicial office. He was caught on camera accepting a $9,000 bribe from a divorce lawyer in chambers to fix a custody case. Had the mother not sought out the FBI, she would have lost her children for something less than most contested divorce retainers.

A concerned parent must now wonder how many such bribes are never discovered across the states. You would think a criminal conviction would lead to corrective behavior. But in shameless fashion, Judge Garson served less than minimum time due, in part, to the many references from his colleagues.How was any precedent or example made? Here’s what the New York Times had to say about it:

“It was news that confirmed every sneaking suspicion, every paranoid fantasy of anyone who had ever felt wronged in a divorce court.”

One colleague, Thomas Spargo, was convicted for soliciting a $10,000 bribe from a lawyer facing a personal divorce. The money was needed for legal fees to defend ethics charges. Does it get any sicker, bribing money from lawyers and litigants to get a judge out of an ethics prosecution?

Kathleen Kane, Pennsylvania’s Attorney General, was prosecuted for a grand jury leak and suspended from practice prior to her trial by the state’s Supreme Court. Two of its members have resigned due to a selacious scandal in the highest chambers of a state court (exposed by Ms. Kane).

Then there’s the Michigan Judge Wade McCree whose case defied all manner of ethics. He admitted to adulterous sex in chambers with a litigant mother while presiding over her case. He was removed from the bench for all sorts of misconduct only after the affair (with pregnancy) was confirmed. The father, placed on a tether for support arrears during this affair was denied recovery by a federal appeals court in 2014 on grounds of judge immunity.

While the list goes on, it begs the question: how can you trust our current system? How can you not be concerned when another custody judge was removed from the bench for admitting to sexual misconduct on his five year old handicapped niece (my own custody judge), see In re Bryan Hedges, 2013 NY Slip Op 02773. This judge held numerous child sessions in chambers without the parents allowed in.

In Morin v Tormey, 620 F. Supp.2d 353 (NDNY, 2009), the same judge and his chief judge were made liable for “political espionage” against a handicapped judge. Because the victim was a court clerk, judge immunity did not apply. Is it such a reach to conclude that the same administrative judge is conducting “political espionage” on litigants he favors or dislikes?

So why are we excluded from such a lawsuit? Ominously the incidents are growing. At its core, the public has been fed an overdose of propaganda behind a custody award for countless disputes involving children. Shared parenting is being crushed in nearly every state by bar associations which have cultivated this gold mine.

The establishment’s preferred framework is not so complicated despite chapter and verse. Custody is awarded to the parent who can best destroy the other in a barbaric contest reminiscent of the Roman Coliseum. Aligned family spectators cheer or cry, and the government band plays on while suicides become commonplace.

When you stop to think, it really is a barbaric process for a nation which styles itself as a civilized one. The collective challenges to our schools, communities and law enforcement are mind-boggling. The public has been duped into believing that custody wars are normal. And judges blame the parents in the end after all the lawyers are paid.

Politicians will condemn needless medical procedures that tax our health care systems. They attack an over-medicated population with costly programs even though government is its biggest drug supplier. Yet they turn a blind eye to these barbaric courts. Why are they being so protected despite overwhelming evidence of their devastation to the people served?

So do yourself a favor. Invest $300 in an education program offered by the Parenting Rights Institute. Comprised of a lecture by a family law expert and a six part reading program, it provides standard court forms and sample material for self representation and controlling lawyer fees. Referrals can also be obtained along with vital information with this program.

Stay out of divorce and family court whenever possible. Explore options such as mediation and cooperation. You never know if a Gerald Garson might be assigned to your divorce case or a Bryan Hedges to interview your children in family court chambers. Look up the program at www.parentingrightsinstitute.com or call the office at (315) 380-3420

4 thoughts on “If $300 could save you thousands in lawyer fees, would you spend it?”