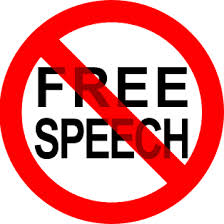 Okay so we’re not Breitbart or Infowars, we’re just an expanding blog site known as Leon Koziol.com dedicated to parental rights. That puts us with mainstream social media. As Chief Justice John Roberts declared in Snyder v Phelps, speech and press must be “robust” in any self-governing nation.

But we weren’t picketing against gay military as they were in that case. We were promoting all military who return from foreign wars only to experience more oppression in divorce and family courts. That made our third branch of government the subject of our public criticisms.

It’s an epidemic captured by Second Class Citizen.Org in Purple Heart’s Final Beat. We’re part of a loose network of advocates seeking vital reforms. That makes all of us bloggers important to our nation’s politics because the divorce epidemic has received sparse coverage by other media.

Today more than ever, we are victims of a powerful bureaucracy seeking to control every facet of our liberties. Families are the last bastion. Accordingly the people rely on secondary media for information and protection. It may be our final frontier before the machines take over.

When major media is censored, they resort to our courts for protection as they should. These forums were created by the people to be the primary guardians of our constitutional rights. But what if the courts are the ones doing the censoring? Where do those victims go for protection?

Welcome to Leon Koziol.com, the most court-censored blog site in America. It started innocently enough, a loving dad and attorney seeking to spend more time with his daughters. He went against his profession for turning our children into a trillion dollar industry.

And boy did they retaliate. This site was offered to fight back, and since its inception, we’ve exposed court corruption like toxic spills from a chemical plant. With each post, public forum or court filing, judges and spineless lawyers acted to extinguish our protected activity.

The Times, USA Today, Chicago Tribune, Fox News, NBC, ABC, CBS and CNN are some of the major media seeking relief in our courts whenever they are censored. Their publishers, editors and reporters are never seized of their children, livelihoods and homes as a punishment.

Secondary media are not so fortunate. They lack real influence. But what we do have is an army of free service providers so the big guys can have something worth reporting. Here, because the courts were targeted, we became the most censored news site in America. Now for some proof:

• On November 25, 2015, a state court gag order was issued against this site. It was so expansive that its details here could implicate a contempt citation and imprisonment;

• In June, 2015, a disciplinary hearing was opened to the public for the first time on Leon’s request to address a law license suspension caused by an insider fired from his office in 2009. That insider was not convicted for her crimes until 2016 after damage was done. Hence it could not be used sooner to defend against a 2010 suspension;https://leonkozioljd.wordpress.com/2016/02/26/finally-veronica-donahue-to-be-sentenced-for-felony-forgeries-join-us-for-justice/

• The ethics lawyers in the witch hunt against Leon were fired for falsifying their time sheets by the same court which suspended Leon. That fact was used to resist charges of inadequate insider supervision which Leon then applied to the judges before him regarding their own ethics staff. No public charges were ever brought against them;

• The 2015 hearing was video recorded by Divorce Corp because of a You-Tube interview with Leon which it publicized in June, 2015 on the subject of child support corruption. This publication caused Leon to be censored at a family law reform convention at our nation’s capital in November, 2014 sponsored by the same entity;

• On April 8, 2014, the state’s Committee on Professional Standards issued a report opposing reinstatement of Leon’s law license. It cited and attached seven blog posts out of more than 200 as offensive in content with no ethics charges ever brought;

• One of the cited blog posts consisted of Leon’s 2013 testimony before the Moreland Commission on Public Corruption regarding fabricated college degrees found by judges. It cannot be detailed here due to the gag order. Another post was merely a dedication to Leon’s recently departed mother, adding a sadistic flavor to it all;

• On May 22, 2013 at a closed hearing, ethics lawyers for the Committee on Professional Standards declared to a court panel that they would oppose reinstatement of Leon’s law license as long as he continued his public criticisms of judges. None was specified or prosecuted while “anonymous” complaints on other subjects were;

• The criticisms included a civil rights forum sponsored by Leon on January 19, 2010 featuring parent testimony for a report to the Justice Department. It was monitored by divorce lawyers. The later fired ethics lawyers asked Leon to explain why he did not introduce himself as a “suspended lawyer” prior to his first ever suspension.

• On January 9, 2008, Leon argued his first appeal challenging a lucrative system of custody classifications which forced parents to fight over their offspring. It was before a court which also appointed ethics committees. One member was his ex-spouse’s divorce lawyer. On the same day, an ethics prosecution was opened for the very first time against Leon after more than two decades of unblemished practice;

• On October 8, 2008, a divorce judge ruled that Leon’s support obligations under that challenged custody law were proper under Title IV-D (Child Support Standards Act). That meant that the judges and lawyers who disrupted the parents’ 2006 agreements did so for no good reason other than lucrative parental conflict. A violation was nonetheless filed to cause another basis for suspending Leon’s law license. Those details are also omitted here due to the gag order.

This is only a small sampling of Leon’s ordeal and punishments for protecting fellow parents (and others who cannot be mentioned here due to the gag order). None of it has ever been disproved or even denied, and this is not the first time Leon sacrificed himself for the people and their rights under the First Amendment.

As chief (corporation) counsel for an upstate New York city, he gave up his post and successfully sued a mayor in federal court for a gag order on public employees. You can look it up at Koziol v Hanna, 107 F. Supp.2d 170 (NDNY 2000)(supported by federal appeals court in Manhattan). On October 9, 2015, the same federal court issued an anti-filing order against Leon.

We continue to fight this battle on principle and for those who cannot be mentioned here. Leon is also fighting for parents, families and children everywhere. But he has been deprived his livelihood for more than six years while a local lawyer convicted of tax fraud on $2 million in client income was never denied his law license even while serving time in prison. We therefore ask you to support us with a donation and anything else you can do.

One thought on “Courts Extinguishing Parental Rights Through Censorship”