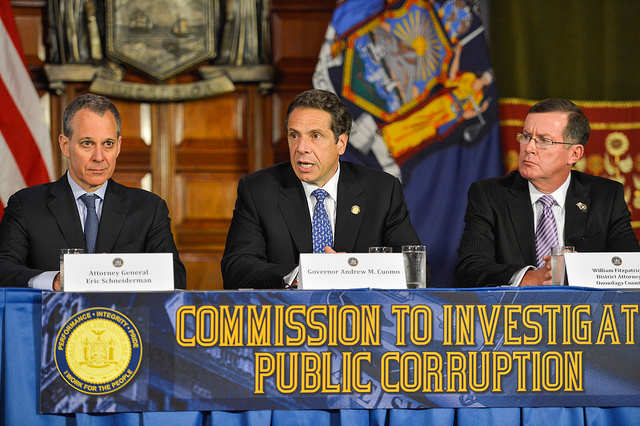 I testified along with Preet Bharara and Loretta Lynch before the Moreland Commission on Public Corruption on September 17, 2013. As followers of this site, www.leonkoziol.com know, I exposed an epidemic in our divorce and family courts citing federal funding abuses under the Title IV-D program. I compared judicial misconduct to a docket sheet in any criminal court.

I also exposed family judges who were awarding me fictional college degrees nowhere in any record to elevate support obligations to unmanageable levels. They refused to correct those errors to the present day, making those degrees the “law of the case” and a feat which no university would dare attempt. This is just part of a shocking ordeal soon to be featured in my book, Killing Courts: A True Story of Corruption and Carnage in America’s Divorce Industry.  Justice is actually occurring in unexpected ways.

Exactly three weeks after that testimony, a process was started to take my daughters from me in retaliation. These “family” judges could not come out and admit it, so they abused judicial office instead with a series of conditions designed to discredit my public message. Only two months later, that process was complete without any finding of unfit parenting. It was a process more familiar to the Third Reich than our third branch of government.

While all this serious “corruption” was occurring to an expendable judicial whistleblower, Loretta Lynch and Preet Bharara were focusing on self-promotion, ignoring my phone calls and reports to their respective offices in Brooklyn and Manhattan. I guess the little victims were not so important as the big time crooks who could give them a name and career advancement. Let’s face it, if you’re self-absorbed and trying to grab media headlines, exposing family law corruption isn’t exactly a sexy topic that’s going to get you any real notoriety. Instead, it’s easier to avoid the elephant in the room and look the other way.

For Loretta’s part, she was later elevated to U.S. Attorney General by Barack Obama where her principal claim to fame was a “family” discussion with Bill Clinton on a tarmac of an Arizona airport. It just so happened at the time that our nation’s top prosecutor was wrapping up a confidential investigation of Hillary’s long list of crimes during her ill-fated campaign for president.

Meanwhile a scorned Preet Bharara was out slaying one corrupt state leader after the other in reaction to Governor Andrew Cuomo who prematurely dissolved his Corruption Commission. He did so when testimony began to implicate the governor himself. For reasons that have not been credibly explained, Andy got a free pass. Even when the “Buffalo Billions” funding scandal came public in 2016, implicating aids closest to the governor, Andy was again excused. It made possible a 2020 campaign for president with Preet as a likely pick for Attorney General. Does anyone else see the logic to all this?

Now we have Preet in love with himself like never before, defying his boss, President Donald Trump, who offered to continue Preet as a prosecutor when standard political procedure was to remove hold-overs loyal to prior bosses. Preet is endeavoring to disguise his overriding ambitions by claiming a rule of independence. But where was that rule when his former boss, Loretta, was on the tarmac with Bill during an investigation of our former secretary of state?

While these political predators are busy corrupting our federal offices, the people are unable to get accountability for their “inconsequential” suffering at the hands of corrupt judges and unethical lawyers, like those engaged in the witch hunt against me. They were allowed to resign by their appeals court employers for falsifying time sheets without any public charges, ethical or criminal, ever brought against them (our standard-bearers of lawyer ethics charged with a duty of preventing over-billing practices).

Imagine what would happen if you or I stole from a court of law? It was clearly a politically expedient maneuver to quell a very embarrassing scandal within New York’s high courts. Yet to this day, nothing has been done to investigate the many cases of those who testified against our third branch of government while hundreds who also came to testify were locked outside on the streets.

A highly researched report was completed by me on March 1, 2017 which exposes an epidemic of scandalous proportion in our nation’s divorce and family courts. It is being shared with people close to the White House with the hope that the “judicial swamp” can be drained of its corruption. I have received many calls for a copy of this report but because I am unfunded and bankrupted by these retributions, I am asking for donations and investor contacts.

It is a trillion dollar industry we are fighting here. Among the calls are moms and dads at wits end concerning their court ordeals. I may have prevented yet another suicide today. For this reason I am welcoming anyone who needs the kind of encouragement I can offer. Believe me, you are not alone. If you know such a person, have him or her call me direct at (315) 796-4000. I do not seek compensation or donations for emergency calls.

Testimony of Leon Koziol, J.D., before the New York Moreland Commission on Public Corruption at Pace University on September 17, 2013. Leon’s eye-opening presentation can be viewed at approximately the 2 hours, 31 minutes and 45 seconds mark:

It’s reached epidemic proportions: a federal funding program rewarding state judges by the number and size of support orders manufactured in our nation’s divorce and family courts. It has escalated to a point where moms and dads have been forced to name a superior “custodial parent” even when they are self-sufficient, cooperative and opposed to “custody wars” in these courts.

Known as Title IV-D of the Social Security Act (Child Support Standards Act), billions of dollars in performance based funding is awarded to the states each year, effectively federalizing domestic relations, incentivizing lucrative conflict, injecting financial bias among  judges in favor of the state against its own citizens and creating a gold mine for lawyers, politicians and bureaucrats.

It is a well concealed epidemic protected by bar associations and special interests which has led to costly social problems, from an over medicated society to a nation with the most imprisoned population in the free world. This report explains how it has all occurred through extensive research and how our new administration can “drain the judicial swamp” in these courts.

After 23 years as a successful civil rights attorney, and another ten years advocating for reform, I completed this report not as an indictment of my profession, although my adversaries like to defame it that way, but only as it fails a moral obligation to reign in vast injuries inflicted upon innocent children and parents duped into believing this is a legitimate system of justice.

In this area of practice, Title IV-D has ushered in what I call “fictional justice.” It has turned these family tribunals, once labeled “kangaroo courts” by a Supreme Court Justice, into profit centers with an ever-diminishing concern for the true “best interests” of our children. Entire college funds have been drained by unscrupulous lawyers concocting needless issues for fee purposes.

Over the past two weeks I have been in Manhattan promoting this report for funding and government action. Copies have been submitted through various reliable contacts to top officials of the Trump Administration. It is also being submitted to a congressional oversight panel to supplement one reviewed in 2016 during the prior administration. It is highly valuable as an expert resource for court proceedings, public hearings and amicus briefs to support any Supreme Court writ on the subject of family rights against the states.

This is a trillion dollar industry which parents must join to fight for the sake of our children and future generations. Unfortunately, the victims continue to be fractured, surfing the net for incompetent free things, crying about ordeals for therapy to no one who cares, and engaging in delusional reforms from the comfort of their home keyboards. It’s no wonder the carnage is escalating.

If you would like a copy of this report, kindly make a financial contribution to our cause on this site. I am also looking for serious minded parent advocates to deliver copies to their local representatives in Congress so that a federal investigation can finally be launched.

I have been inundated with individual war stories over the years without compensation on the assumption that I am directing some kind of free legal aid society. We are about long overdue reform and welcome those who have something meaningful to offer, i.e. an investor, valuable service or D.C. rally.